skip to main | skip to sidebar


We also have Turkey Breast, Leg of Lamb, Pork Loins, Hams and Chuckar Quail available for your Christmas dinner.  We are currently taking reservations and have a limited supply. 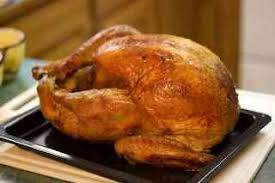 Posted by Genell at 5:59 PM No comments:

Pork Osso Buco Recipe
I pretty much followed the recipe for veal osso buco but modified it some to simplify both the ingredients and the process. Basically, you brown the shanks, brown the vegetables, and add all the ingredients into a big pot and slow cook for a couple of hours until the meat is falling off the bone. Easy.
Ingredients:

How To Make At Home:

Preheat your oven to 325º F. While the oven is heating up, prep your ingredients and then season the shanks with a little salt and pepper.

Once seasoned, heat the oil and brown the shanks in a large, ovenproof casserole pan or roasting pan. You can always brown them in a smaller fry pan, two at a time, and then transfer them to a bigger pan.

I use my Dutch oven for all my braising and it works great. I can brown the meat and vegetables and then just throw the pan into the oven. It is cast iron under that gorgeous enamel coating producing nice even heat when cooking.

When the shanks are browned, remove them and add the vegetables to the pan. Sauté the vegetables for just a few minutes until they start to brown a little. They will continue to cook with the meat while braising. If the vegetables appear dry, add a touch more olive oil. You can add the anchovy at this point if you are using it.

Add the wine to deglaze the pan of all the brown bits of meat and vegetables that might be stuck to the bottom of the pan. Let the wine cook down until most of it is cooked off. Add the chicken stock and diced tomato (with juice) and bring to a boil.

As soon as you come to a boil, turn off the heat, add the pork shanks and Bouquet Garni, cover with a tight fitting lid and transfer to the oven. Let this cook for about 2 hours. When the meat is tender and falling off the bone, it's done.

To Make The Tastiest Sauce Ever
When the meat is done, carefully remove the shanks from the pot trying not to let all the meat fall off the bone. Also remove and discard the Bouquet Garni. Using a hand blender if you have one, puree the sauce until smooth. If you don't have one, use your regular blender or food processor. You can also use a food mill too if you have one.

Taste and adjust the seasoning with salt and pepper.

How To Serve It
I like to serve this dish with mashed potatoes. I use a large soup bowl that's more like a deep plate. Start with the potatoes in the center of the bowl, cover the potatoes with sauce, and then top with a pork shank. There will be plenty of sauce so bring some to the table in a gravy boat in case your family or friends want some extra sauce. They will.

This is an inexpensive, as good as it gets meal for this time of year. I highly recommend you give it a try.
Posted by Genell at 9:05 AM 1 comment:

News Blast:  We are now taking orders for a Pasture Pure Thanksgiving turkey ($6.00/lb.).  Order early because we are selling them to customers in a wider radius this year and you don’t want to miss out.

Posted by Genell at 8:22 AM No comments:


2 packages of Beef for Kabobs

Posted by Genell at 8:16 PM No comments:

Posted by Genell at 8:14 PM No comments:

North Carolinians should be concerned about SB 648 which is currently in the House Rules committee.  S.B. 648 would create two new offenses in state law. The first would prohibit lying or failing to disclose information on a job application to gain access to a business for the purpose of taking photographs, videos or audio, or to remove records from a business.  The second offense would require someone who obtains those recordings or records under that guise to give them to police within 24 hours. Violations for both offenses would be punishable by fines of $10,000 for a first offense and $50,000 for subsequent offenses.

Supporters of SB648 (some of whom have ties to NC Farm Bureau, Monsanto, Wendell Murphy, Smithfield PAC, family members of the Clinton pork and turkey producers Prestage Farms and other agribusiness companies), as well as the NC Chamber of Commerce, who is driving the bill, have presented this issue as merely a “transparency in employment law.”  SB648 is not designed to accomplish transparency in employment, but to prevent transparency of operations in large agribusiness.
If SB648 had been law in 2011, the abuse of turkeys at a Hoke county farm that grew under contract for Butterball would never have been prosecuted.  We know from the Butterball case that law enforcement and government officials cannot always be trusted to properly investigate a proposed animal cruelty or food safety problem.  Dr. Sarah Mason, director of animal health programs in the NCDA’s Poultry Division at the time of the investigation, contacted Dr. Eric Gonder, a veterinarian for Butterball, to relay that a Hoke county farm was being investigated for animal cruelty.  She was later charged and found guilty of obstruction of justice and resisting, delaying or obstructing officers.  This type of “cronyism” demonstrates the difficulty that can arise in determining who to trust when turning over evidence of such abuses.  It may well take more than 24 hours to determine who can be trusted to conduct a professional investigation.
Agriculture classes that I took in the 1980’s still taught animal husbandry.  The physical abuse that took place at the Hoke county farm raising turkeys for Butterball was an egregious act of poor animal husbandry.  Ag classes now focus on animal science and livestock production.  I contend that this change has brought a focus in agriculture on increasing profits, sometimes to the detriment of the animals involved.  A farmer employing traditional, sustainable agricultural practices does not have thousands of poultry or hogs on his farm.  He knows his animals and goes into the pasture to check on them.  Their welfare is his primary concern.  I contend that CAFO’s (Concentrated Animal Feeding Outfits) have so many animals that the animals become almost an inanimate object and are seen merely as a resource that can be replaced.  This sort of attitude can easily lead to animal cruelty.
As an independent farmer, I am required byUSDA to transport my animals to the processing facility in a humane manner.  The USDA inspector on site has the authority to turn away from the facility any animal delivered in a manner that constitutes poor animal welfare.  For example, I can be turned away from the plant for transporting livestock in an un-ventilated livestock trailer when it is hot or for using an electric shock stick to get my animals to exit the trailer into the facility.  Ultimately, the welfare of the animal overrides my rights as the owner of the animal.  Should this not be the same with any animal cruelty discovered by an employee, no matter what the circumstances of employment of that individual?  Should the company’s rights to ownership of that animal give them the right to abuse the animal without impunity?  It doesn’t for the independent, sustainable farmer.  Why should the rules be any different for agribusinesses such as Butterball, Smithfield Foods, Prestage, or any other company?  It is my contention and that of many consumers that the humane treatment of animals and consumer food safety are more important than “transparency in employment.”
Smithfield Foods, was purchased by China’s largest pork producer, Shuangui International , last week.  China has a spotty record on food safety.  In recent years, the country has dealt with numerous food scandals, involving toxic baby formula, tainted pork products, rice contaminated with heavy metals and pet deaths in North America from Melamine in the pet food.  The Chinese also have a spotty record on human rights.  Now, Shuangui International will control the operational procedures of Smithfield Foods.  Many American consumers are questioning the long-term ramifications of this to the welfare of the animals and the safety of the food produced by Smithfield Foods.
The passage of SB648 will provide a legal avenue to protect the “rights” of large companies no matter how many animals are treated cruelly nor if there are food safety issues.  It will however serve as a serious catalyst within NC and other states for the growth in sales of meat from sustainably and humanely raised livestock.  However, with much of the CAFO pork produced in NC currently being exported to China, a decrease in sales in the US market may pale in comparison to the money to be made in meat exports.    Will the NC Chamber of Commerce, our NC Legislators, Farm Bureau and Big-Ag ensure the welfare of the livestock raised in NC and the safety of our food supply?  Will they bear the responsibility?  I doubt it.  It appears that their primary concern is to keep the foreign money flowing.
Please contact your legislators today and tell them to vote against SB 648.
Thanks,
Sandra Genell Pridgen
9th generation family farmer
Rainbow Meadow Farms
Posted by Genell at 8:10 AM No comments: